« Back to blog Company News

A Letter to the Community

It’s my very great pleasure to share that Fishtown Analytics has raised $12.9M to invest in the growth of dbt. The round closed earlier this month and was led by Andreessen Horowitz.

This fundraise came together very quickly. Typically deals like this take 6–12 months to put together from beginning to end, but this was ~10 weeks from kickoff to close. In the process, I had the opportunity to meet most of the major investors in the enterprise data space, and every one of them already knew about dbt and its community. In fact, I heard some version of this line over and over again:

“The product is great, but what gets us really excited is the community.”

I couldn’t agree more. dbt is a solid product today, but there are a lot of great products out there. What’s truly unique about dbt is the community behind it. The community is now almost 1,700 companies and 5,000 practitioners strong, and it continues to grow at a rapid clip.

In this post I want to talk a bit about how we got here, why it felt like the right time to raise, and where we’re going from here.

How we got here

Casper was the first well-known startup to bet on dbt, way back in 2016. Their team included Scott Breitenother, Duncan Fraser, Danny Brown, and Michelle Ballen. They dealt with the early shortcomings of dbt, believed in its potential, and started to tell other New York startups about what we were building. When Danny went to Starry, he took dbt with him. When Michelle went to Billie, she took dbt with her. When Scott started Brooklyn Data, he made dbt a core part of their tooling, now rolled out to dozens of companies. All of them gave us feedback, talked about the product at Meetups, and participated in the dbt Slack community. 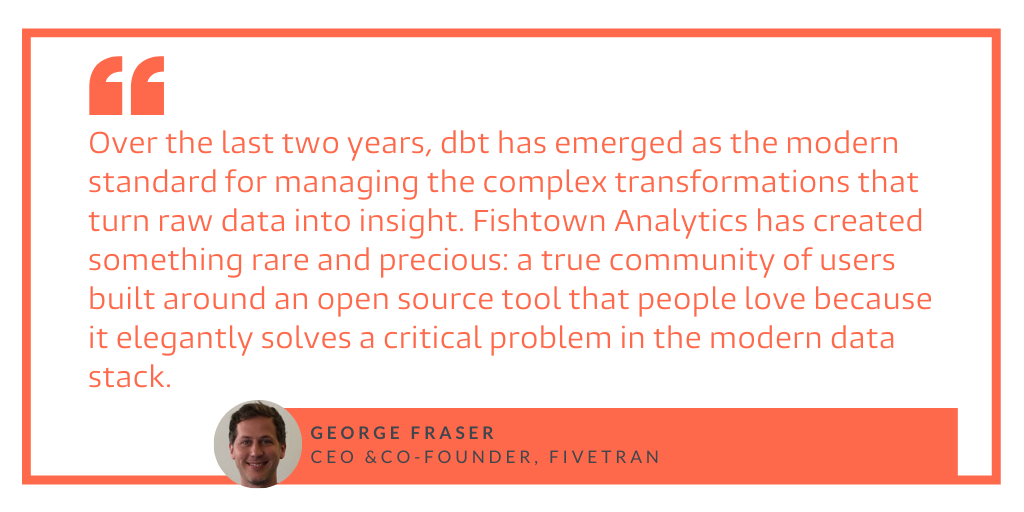 Their belief convinced others–SeatGeek, WayUp, Betterment, Bowery Farming, Birchbox, eventually freaking JetBlue! The New York community is the largest and most engaged dbt community, and we owe much of this to Casper.

This pattern has played out in other cities. In London, Dylan Baker gave dbt a try at Simba Sleep, he took dbt with him to Growth Street, and eventually left to start doing analytics consulting work using dbt. Dylan also founded the London dbt Meetup, now one of the largest in the world. Via the meetup group, Monzo got turned onto dbt and their team has become huge advocates in the large London-based fintech community: Simply Business, Receipt Bank, Landbay, and GoCardless.

I'm going to stick my neck out and say that @getdbt is one of the most important data tools of the last 5-10 years. Here's why.https://t.co/bxNOjMWfPP pic.twitter.com/OOiy4AAHqU

Here’s another story. Claire was the 52nd person to join dbt Slack while she was implementing dbt at Airtasker in Sydney. Eventually she moved to Philadelphia to manage the dbt community full time, but the community in Australia has stayed strong. Companies like Canva and CultureAmp are leading the way there and Peter Hanssens organized the first Sydney dbt Meetup last October.

This is how the dbt community grows. We see the same pattern emerge in every single city where there is a sizeable community today:

Over the past four years, this pattern happened slowly–first in New York, then London, then San Francisco. But that pace is changing. This year we’re seeing this start to happen in LA, Boston, Seattle, Montreal, Chicago, Berlin, and many more cities.

And that brings me to why we raised.

We raised venture money so that we can keep up with you!

Take a look at the below graph to see what I mean:

This curve maps extremely closely to a 10% month-over-month exponential growth curve. In the early days of this exponential curve, we (Fishtown) could keep up with the needs of the community fairly easily. When we hired Jake Beck in 2018 we immediately doubled the number of FTEs working on dbt. When we hired Claire later that year we tripled the amount of FTEs directly supporting the community.

But the numbers are getting bigger, fast. Today, we have Fortune 500 companies rolling out dbt to hundreds of internal staff. We have cutting-edge data orgs deploying dbt to dozens of data engineers and dbt docs to 1,000+ data consumers. We’ve been getting dozens of PRs a month. And we are supporting all of this with…four engineers. This is simply not enough humans to…

….give the dbt-spark community the kind of love it deserves

….make the kinds of investments we’ve wanted to into dbt docs for over a year now

We’re raising money to build more product faster. We’ve already doubled our engineering team to eight, and our target for the end of 2020 is to have a team of 15 software engineers working on both dbt Core and dbt Cloud. I can’t tell you how excited I am to start building faster!!

Where We Go From Here

Open source is, in many ways, anti-capitalist. Rather than owning the “means of production” (the code), open source creators explicitly give away the code (roughly speaking) to the community. This can create a tremendous amount of goodwill from a user community, and can kick-start what Eric Raymond calls a “gift economy”.

Rather than being ruled by extrinsic reward (money), gift economies rely on intrinsic rewards — the feelings that inspire you to want to give gifts. You improve the docs because someone helped fix an issue. Someone else answers a question in Slack because they learned a ton from a recent meetup talk. Large companies assign entire FTEs to implement features they care about and then contribute that code back.

No one is getting paid to do any of this—these social norms arise organically out of a shared sense of community, trust, and the realization that we’re all better off if we work together. This dynamic is at the heart of what makes the dbt community magical.

But gift economies are delicate—if that foundational trust is damaged, it’s difficult or impossible to recover. Social norms crumble. Everyone reverts to being a free-rider in a tragedy of the commons. Innovation slows to a crawl.

I say this because there are those of you right now reading this post thinking “Great, another open source software company raising venture money — they’re going to suck all the magic out of the community in search of growth-at-all-costs.” Or, as Vicki Boykis puts it, good things don’t scale.

If that’s going through your head, I’m right there with you. In fact, one of the reasons we didn’t take money long before now is that I didn’t know how to make fundraising work for the community instead of against it. I had no desire to fuck up something great in the service of some hopes-and-dreams hockey stick bullshit.

In case you can’t tell, I really, deeply, care about this community. It is my life’s work. I pour everything I have into it every single day. The thing I want to make sure you’ve heard me say is that Fishtown Analytics exists to support the dbt community, not the other way around.

In fact, I wrote that sentiment as the founding charter of the business. Here’s a snippet from values.md, originally committed on 4/20/2016, before the company was even founded:

Profits are exhaust.We are a mission-driven company. We believe that profits are an important tool in the pursuit of our mission, but they are not the mission itself.

We are more concerned with value creation than value capture.We will only succeed if we create value in the world. If we optimize for that first, commercial success will follow.

Values are more important than success.We are not interested in success absent the values in this document. We have strongly held opinions on how a company should be built and these are non-negotiable. We do not believe that these opinions are an absolute truth, but they are an absolute truth for us.

If you’ve been a member of the community for any length of time, you’ll see Fishtown Analytics living these values day-in, day-out. This is because every new employee gets a talk from me during onboarding specifically focused on our values, with an emphasis on the final one. Here’s how I say it during that talk:

This is a somewhat unusual thing for a company founder to say. But I didn’t set out to start a company, I set out to pursue a mission. The company is simply the vehicle to do that.

And now, that vehicle has a lot more fuel in the tank.

Even with more resources, we (Fishtown) are still a tiny, tiny fraction of the community, and we can’t do it all ourselves. We’re still depending on you to help spread the word, answer questions in Slack, log issues, build packages, make PRs, improve the docs, write posts, train your peers, and more.

We are still at the very beginning of this story. Analytics engineering will eventually be practiced at every organization that uses operational data to make decisions. And we, all of us, are defining the discipline’s best practices and tooling together in real time. It’s an absolute privilege to be a part of it with you.

See you in Slack!

🎓Register for the next dbt Learn

« Previous We're cancelling Coalesce. Here's what to expect instead. Next The farm-to-table testing framework: How to catch data quality issues before they break your dashboards »